PLEASE TAKE ON DESKTOP OR TABLET.

This cultural health and skill assessment is statistically valid and reliable as long as you answer honestly and without outside resources. It measures your cultural health and skill against the principles of Cultural Mastery. The assessment is graded on a scale of 1 to 10, with 10 being the ultimate cultural master. Upon completion, you’ll get all your scores in your five-page personalized Cultural Assessment Insight Guide.

Time: 20 to 30 minutes. You must complete it in one sitting.

Privacy: We process all data through a secure server, and your data is private. No one else will see your answers. We use this data to provide you with an honest understanding of your cultural health and skill.

Begin the assessment below. ALL FIELDS REQUIRED. 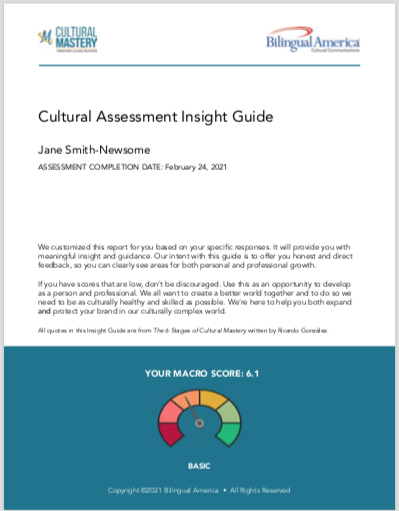 Get Free Access to our How to Engage in Culturally Complex Conversations Core Principles Course.